At Tupelo Con, Andrew and Kinsey had the opportunity to speak with actor John Anderson! John hails from Birmingham, Alabama, where his involvement in the local cosplay community inspired him to pursue acting. He has appeared in many films and television shows such as “Guardians of the Galaxy Vol. 2,” “Spiderman: Homecoming,” “Black Panther,” “Tag,” “Logan Lucky,” “Stranger Things,” and “Sleepy Hollow” among numerous others. Check out our conversation below and let us know what you think!

Your love of acting was born out of cosplaying. What made you want to get involved with the cosplaying community?

I’m a giant nerd [laughs]. It’s always been easier to dress up and be somebody else. I think it’s why I like being an actor so much. I cosplayed for children’s hospitals and did charity events as the Joker, Darth Vader, Chewbacca and other tall, lanky, weirdo, characters. It just really suits me and I thought “Maybe I can make a career out of this.”

Do you still cosplay?

Technically, I’m not allowed to at the moment. It’s kind of a career now so they don’t particularly care for you to go out and do it, especially if you work at Marvel or do a Marvel movie, they don’t want you going out as a DC character.

How did you first make the leap to appearing in films?

Atlanta has become the new mecca of Hollywood, we call it Y’allwood now. There’s so much stuff going on there. I literally answered an ad on Facebook seeking a tall skinny ugly guy with crooked teeth and it turned out to be Guardians of the Galaxy Vol. II four months later.

I read that Oprah Winfrey helped you get your first speaking role. Is that correct?

Yeah! I went to a background job where I was playing a scientist and the people that were making the movie picked me out and gave me lines. It got me a SAG card and now I’m a SAG actor and performer. I’ve upgraded myself. 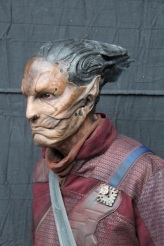 You’ve had background roles in a lot of big movies. One of them was “Guardians of the Galaxy: Vol. II.” What was the process like of having the makeup applied for that character?

I live in Birmingham, so I had to get up at about 11 p.m. the night before and drive two hours to be at Pinewood Studios at 2 a.m., since they’re an hour ahead of us. In the beginning, it took about four hours to get it on. The mask is glued to your face so it’s not one that you just could take off and go eat a cheeseburger. I think they got it down to about two and a half to three hours by the end of it. It took about an hour and a half to take off.

You’ve appeared in a couple other Marvel films like “Spider Man: Homecoming” and “Black Panther.” What is it like being a small part of this huge series of giant blockbuster films?

I’ve been reading comics since I was like four or five years old. I love it and I’m on the other side now. I’m kind of where every nerd wants to go to. Everybody wants to do it once, but I’ve been blessed to do it quite a few times. I remember I begged to be in Black Panther, I’m not gonna lie. I remember they said “Well John, you know we love you, but not a lot of 6”8 white guys are gonna be running around Wakanda, Africa” but I ended up getting to be in a bonus scene. Being 6”8 is very helpful when they’re looking for background actors if they need an alien or a witch or a vampire or whatever.

Another movie I wanted to ask about was “Logan Lucky.” What was it like being in the presence of such a revered filmmaker like Steven Soderbergh?

It was really cool. Very early on I did Logan Lucky as a background guy and it was funny because that was my first Hollywood time-out I got. That’s a term I coined. Being 6”8, he kept seeing me running through like every scene I was working in and he finally pulled me aside and said “Look dude, you gotta go sit out for the rest of the day.” I’m like “Why, am I in trouble?” He said “No, I can just see you in every effing shot. There’s a seven-foot tall man running through every shot in the movie.” I called it a Hollywood time-out. To be an effective background actor, you’re supposed to blend in.

What’s the most valuable piece of advice you’ve gotten from someone in the entertainment industry?

Chris Pratt once told me to never give up on the day you would have succeeded. I’ll always remember that.

Is it often that you get to interact with the actors and filmmakers if you’re a background actor?

It’s very irregular, but it depends on the actor. Some of them are really cool. Some of them are just people. I find it best if you’re in that situation whether it’s on set or just at a con or anywhere, just be a human being and you’ll get way more traction out of it than freaking out and going “Oh my god, there’s Beetlejuice!” or whoever it is.

Being that we are at a convention that celebrates comics and pop culture, do you have a favorite piece of pop culture that you’re currently consuming?

That’s a hard question because I’m into so much stuff. Star Trek has always been my favorite. I don’t like Discovery though. I’m not a big fan. Of course “Avengers: Endgame” came along and that’ll probably be the showstopper for the summer. I’m really looking forward to the next “Spiderman” movie. He’s my all time favorite comic book character. I met a guy in a Spiderman suit when I was four years old at a mall and this is a 1980/1981 kind of Spiderman cosplayer. It was just spandex with a zipper, but I never forgot it. It was amazing, no pun intended.

Do you have any upcoming projects that you’re working on?

Yeah, I have a few things, but I’m not allowed to say what they are yet.

Do you have anything else you would like to add?

I am the keeper of the cheese. I like so much volleyball, and I didn’t even know Elvis. Incoherent nonsense is all I’ve got, I couldn’t be funny at this hour [laughs].

For the upcoming 20th anniversary of the classic sports comedy Like Mike, we interviewed director John Schultz and producer Peter Heller! Read all about it on conventionalrelations.net. Link in bio!
Our interview with the wonderful and talented @juliemdolan is now available on conventionalrelations.net! We chat about Princess Leia, Rock and Roll Fantasy Camp, Gilmore Girls and so much more. Link in bio!
On this day in 1976, Star Wars began its first day of shooting in Tunisia! We have an interview with someone Star Wars related coming soon... #whocoulditbe
We're back in action! Our interview with screenwriter Joel Barkow is now available on conventionalrelations.net. We chat about his work on shows like Big Bad Beetleborgs, Mystic Knights of Tir Na Nog and more! Link in bio
To continue our celebration of Degrassi: The Next Generation's twentieth anniversary, we present an interview with the one and only @thedanielclark!
For the upcoming twentieth anniversary of Degrassi: The Next Generation, we got to take a trip down memory lane with with one of the shows former writers @zombietollbooth! We discuss interesting topics such as the lost movie Kevin Smith was supposed to direct, the weird rumor about why Kendra left the show, and why its important to not be kind to your characters.
Our own @_abob_ released a new album today! Check it out on the link in his bio.
Happy Star Wars Day! Dreaming of the day when @disneyplus will add Turkish Star Wars and this sketchy bootleg VHS tape to their catalogue. #makethatshitcanon
Been on a big documentary watching spree this year. Here's a few that I've enjoyed. Anyone have any reccomendations?
Finally managed to get a copy of this limited edition Hey Arnold vinyl! So much love for this show. Thanks for all the amazing and iconic work @craigbartlett and @jimlangmusic
Happy 52nd birthday to the great Paul Rudd! So many memorable performances over the years. What's your favorite Rudd role?
Our interview with @garylgray is now available on conventionalrelations.net! We chat about his experiences growing up as a child actor, his work on shows like "The Fairly OddParents" and "Rocket Power," and his current projects! (Link in bio)
Happy International Womens Day! Wanted to pay tribute to some of the many talented and hardworking female directors, screenwriters and producers.
Heartbroken to hear of Jahmil French's passing. He was an incredibly underrated performer during his time on Degrassi and gave one of the franchises best performances in the episode "Smash Into You." Sending our thoughts and love to his family, friends and fans.
Happy 56th birthday to everyone's favorite skeptic heroine, Dana Scully! I wonder if Mulder remembered this year?
For the thirtieth anniversary of Oliver Stone's "The Doors," we interviewed the film's co-writer Randall Jahnson! We spoke about the lengthy effort he put into researching Jim Morrison, differences between the original script and finished film, and more. (Link in bio)
Happy Annoy Squidward Day!
RIP Dustin Diamond. Saved By the Bell was a big source of comfort for me growing up and it will always hold a special place in my heart. Wish we could have seen Screech in the reboot.
Happy birthday to the legendary Nicolas Cage! No matter what people say, I will always think his performance in Vampire's Kiss was brilliant. What's your favorite Cage film?
So saddened to hear of Jeremy Bulloch's passing. We were very fortunate to meet him a couple years ago at @avccons and he was just as cool in person as he was on screen playing Boba Fett. RIP
Loading Comments...
%d bloggers like this: