My mission of Star Trek watching is off to a rough start. Being a newbie to this franchise, I had no idea that the “first” episode of the original series was the first pilot. I also did not know that AIR date and PRODUCTION date mattered when it came to the watch order. So my notes for the first five episodes (according to Netflix) did not make much sense, knowing what I do now. So I re-watched the episodes in order so my notes made sense.

As of this writing, I am almost finished with the first season of the Original Series, so here is a look at the first five episodes I watched in PRODUCTION order! Let me know what you think! 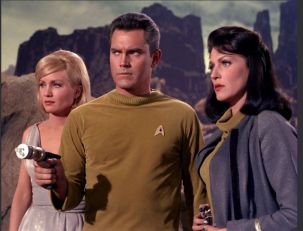 I was highly disappointed when I found out this was the only episode with No. 1. She is actually my favorite character. For this to be produced in the 1960s, they made her a bad ass who wore pants and had a commanding leadership role. My queen.

Captain Pike is kinda a dick and has a problem with women in authority.

I think one of the main messages of this episode is that beauty is not always skin deep, as we see with Vina. Pike was clearly thinking with his man parts during his illusions.

Not gonna lie to you: the telepathic space aliens freaked me out a little.

So far, this one is still my favorite, but I am sure that will change.

Episode 1: Where No Man Has Gone Before 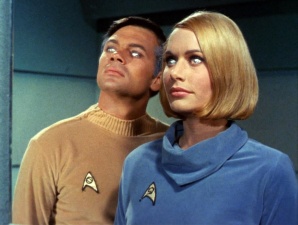 Jesus, why are Spock’s eyebrows so high?!?!

Also, was ESP really a concern of people in the 60s?

The poem that Mitchell reads: “My love has wings, slender, feathered things with grace in upswept curve and tapered tip,” is touching.

Mitchell trying to kill Kirk was a little intense.

I am starting to get a sense that they are going to leave random one off characters on other planets.

“Do you like what you see? Absolute power corrupting absolutely?” – Kirk

Ok. This episode is definitely a memorable one for me. I see what this reddit thread means by TOS being “campy”.

I laughed out loud every time that damn cube showed up on the screen.

Then the creepy alien man showed up. I thought it could not get any scarier.

Then the terrifying teeth baby graced my tablet screen. I audibly screamed.

I think I love Dr. McCoy. “What am I, a doctor or a moon-shuttle conductor?”

“I’ve already got a female to worry about. Her name’s the Enterprise.” – Kirk

I did not care for this episode. Women are treated as objects. Walsh/Mudd is literally the scum of the earth and I hate him.

The only thing I thought saved the episode is that Ruth (girl in green) looks very similar to Kacey Musgraves, who is my queen.

“The fact that my internal arrangement differs from yours, doctor, pleases me no end.” – Spock

Episode 4: The Enemy Within

I really liked this one. I have been referring to it as “The Tale of Two Shatners.”

It was so odd seeing Kirk lose his cool. It was also uncomfortable to see his evil side treat Janice the way he did. Normal Kirk would never do that.

Those cute little “space monster” things were adorable, too! It was difficult to pretend it was not a dog.

Also, to see Sulu freezing broke my heart. </3 “Any possibility of getting us back aboard before the skiing season opens down here?” – Sulu

“We all have our darker side. We need it! It’s half of what we are. It’s not really ugly. It’s Human.” – McCoy

I did not care for this episode, either.

I love Lt. Uhura trying to talk to Spock. Poor Spock. Not feeling emotion must be nice sometimes, though.

My man Dr. McCoy though. He is swoon worthy.

Salt is bae forreal, though. I would have problems living without it too, tbh.

“Tell me how your planet Vulcan looks on a lazy evening when the moon is full.” “Vulcan has no moon, Miss Uhura.” “I’m not surprised, Mr. Spock.”

To continue our celebration of Degrassi: The Next Generation's twentieth anniversary, we present an interview with the one and only @thedanielclark!
For the upcoming twentieth anniversary of Degrassi: The Next Generation, we got to take a trip down memory lane with with one of the shows former writers @zombietollbooth! We discuss interesting topics such as the lost movie Kevin Smith was supposed to direct, the weird rumor about why Kendra left the show, and why its important to not be kind to your characters.
Our own @_abob_ released a new album today! Check it out on the link in his bio.
Happy Star Wars Day! Dreaming of the day when @disneyplus will add Turkish Star Wars and this sketchy bootleg VHS tape to their catalogue. #makethatshitcanon
Been on a big documentary watching spree this year. Here's a few that I've enjoyed. Anyone have any reccomendations?
Finally managed to get a copy of this limited edition Hey Arnold vinyl! So much love for this show. Thanks for all the amazing and iconic work @craigbartlett and @jimlangmusic
Happy 52nd birthday to the great Paul Rudd! So many memorable performances over the years. What's your favorite Rudd role?
Our interview with @garylgray is now available on conventionalrelations.net! We chat about his experiences growing up as a child actor, his work on shows like "The Fairly OddParents" and "Rocket Power," and his current projects! (Link in bio)
Happy International Womens Day! Wanted to pay tribute to some of the many talented and hardworking female directors, screenwriters and producers.
Heartbroken to hear of Jahmil French's passing. He was an incredibly underrated performer during his time on Degrassi and gave one of the franchises best performances in the episode "Smash Into You." Sending our thoughts and love to his family, friends and fans.
Happy 56th birthday to everyone's favorite skeptic heroine, Dana Scully! I wonder if Mulder remembered this year?
For the thirtieth anniversary of Oliver Stone's "The Doors," we interviewed the film's co-writer Randall Jahnson! We spoke about the lengthy effort he put into researching Jim Morrison, differences between the original script and finished film, and more. (Link in bio)
Happy Annoy Squidward Day!
RIP Dustin Diamond. Saved By the Bell was a big source of comfort for me growing up and it will always hold a special place in my heart. Wish we could have seen Screech in the reboot.
Happy birthday to the legendary Nicolas Cage! No matter what people say, I will always think his performance in Vampire's Kiss was brilliant. What's your favorite Cage film?
So saddened to hear of Jeremy Bulloch's passing. We were very fortunate to meet him a couple years ago at @avccons and he was just as cool in person as he was on screen playing Boba Fett. RIP
Our interview with Scott Barber, co-director of upcoming documentary "The Orange Years: The Nickelodeon Story" is now available on conventionalrelations.net (Link in bio!)
For the recent 20th anniversary of X-Men: Evolution, we interviewed the show's co-developer Robert N. Skir! Check it out (link in bio)
RIP Alex Trebek. Television will never be the same without you.
Our interview with @ronalbanese is now available on conventionalrelations.net! We chat all about his new book "Conversations With Phantoms: Exclusive Interviews About the 1978 TV Movie, Kiss Meets the Phantom of the Park." (Link in bio!)
Loading Comments...
Comment
×
%d bloggers like this: